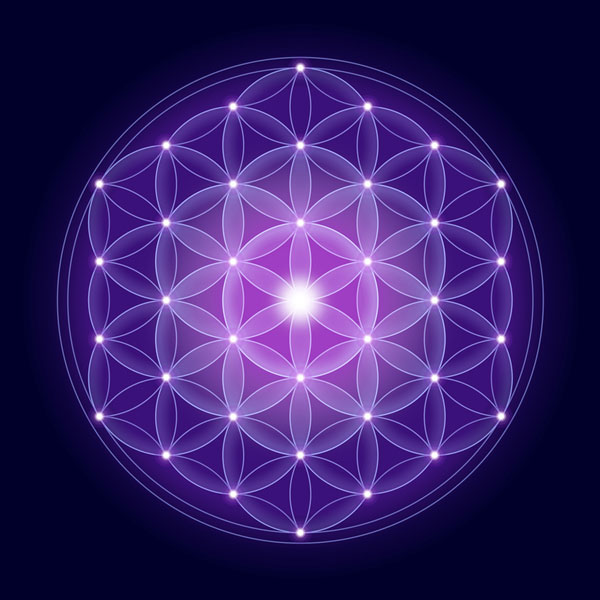 Sacred symbols are found in all cultures. They are used for a variety of purposes such as healing, protection, prosperity, fertility, creativity and spiritual awakening.

Meditating on sacred symbols is an ancient practice that awakens the inner world of the psyche and brings the power of that symbol into everyday life. This practice unlocks the mysteries of your inner being and harnesses the power of your archetypes and human drives for higher purpose.

Meditation or contemplation upon a symbol such as a yantra or mandala has a unifying and therapeutic effect. Its balanced form reintegrates the fragmented parts of the self. The symbol of the yantra or mandala can also act as an amulet or talisman, protecting its owner from harm. In Christianity the cross is a talisman used to invoke higher awareness and ward off evil. In Jewish custom a talisman containing sacred words from ancient texts, called a Mezuzah, is placed at the door of the home to protect the family.

A yantra is any device by which something that is intended is accomplished. It is used in rituals and meditation to open a doorway into the psyche, the vijnanamaya kosha.

A talisman or amulet is any object that has the power to protect its owner and reduce the impact of negative karma. Gems, statues, coins, drawings, pendants, rings, plants and animals can all be used as talismans or amulets. They are usually engraved with some form of sacred symbol.

For amulets and talismans to work they must be empowered to bring them to life. To do this the owner of the talisman must form a relationship with it and imbue it with his or her own personal energy. Any form of ritual that is authentic and felt can be appropriate for this purpose, and may include the use of mantras, meditations, visualizations, incantations or magical spells. A simple, 3-step ritual is given at the end of this article.

Once the empowerment is performed, every time you see or touch your talisman or amulet you are reminded of the wisdom and power inherent in the symbol, and of the intention and purpose that you pronounced in your ritual. It focuses your mind and prevents you from becoming lost in negative or destructive thoughts and emotions.

The Sri Yantra is considered the greatest of all yantras. It displays the splendor that arises when cosmic consciousness (Shiva), and cosmic energy (Shakti) interpenetrate each other to create the root elements (the tattwas) of life.

The Sri Yantra is made up of nine interlocking triangles, four upward (consciousness) and five downward (energy), that radiate from a central point. They interlace to form forty-three smaller triangles that represent the entire cosmos.

When meditating on the Sri Yantra first fix your mind upon the symbol and, while maintaining steady focus, align yourself with the cosmic reality represented by the symbol. Over time, knowledge is revealed to your inner being via your intuition.

The Flower of Life is a form within sacred geometry that represents the creative principle. It is made up of six petals forming a hexagon. Like the Sri Yantra, it represents the interlocking of consciousness and energy giving birth to life.

The flower of life symbol is found in the heart chakra as the six-pointed star surrounded by twelve petals.

The Flower of Life is often used as a talisman to protect against negative forces. It is a universal symbol found all over the world in all cultures. Its oldest inscription is found in Egypt in the temple of Osiris, which is 6,000 years old. Ancient carvings of the Flower of Life have been found in India, China, North and South America, and many other parts of the world. In Jewish mysticism, Kabbalah, the Flower of Life is the basis of the Tree of Life, which is represented by three pillars on which various psychic centers are arranged.

Perform this small empowerment ritual at any time of your choosing. You may choose an auspicious time such as a special day of the week, the next full moon (when energy is higher), or on your birthday or anniversary.