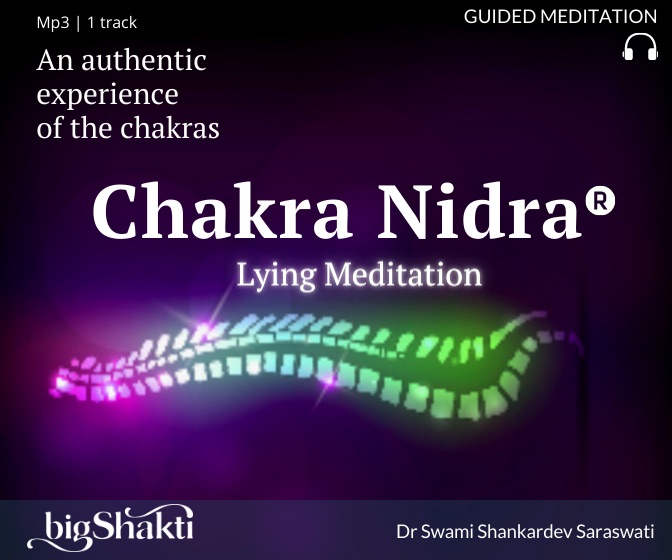 Chakra Nidra® is a technique developed by Swami Shankardev Saraswatī from www.bigshakti.com.

Chakra Nidra® employs a technique developed by Swami Satyananda of the Bihar School of Yoga, called Yoga Nidrā, and combines it with powerful chakra meditations. Together these form an innovative approach to Chakra Meditation practice, one that is much more easily accessible, partly because the technique is performed in the lying position.

Vidyā is a Sanskrit word that means knowledge or science. science, learning, knowledge and scholarship. Vidya is not mere intellectual knowledge. It refers to “correct” knowledge that cannot be contradicted. It is “true” knowledge that is intuitively gained. As such it is called universal knowledge, sanātana dharma in Sanskrit, knowledge that is relevant and applies to all beings, irrespective of society, culture, time, or place.

Chakra Vidyā is the science of the chakras, which is part of the bigger science of Tantra Vidyā. Tantra is a science that utilizes mantras and yantras to activate the chakras, awaken kundalinī and evolve your consciousness.

The vijñānamaya kosha is the sheath of intelligence, one of the five sheaths that make up the totality of who we are. Vijñāna can be translated as the organ of intelligence.

Chakra Nidrā® is a series of progressively more complex concentration meditation techniques that are based on ancient yoga tantra wisdom traditions that developed the science of kundalinī and the chakras.

There are two main stages to Chakra Nidrā®

Chakra Nidra® provides the best of both worlds – it is both a deeply relaxing mediation performed in the lying position and a powerful meditation that leads you into a deeper experience of yourself.

The most advanced form of Chakra Nidra ® involves the awakening of the chakras and the unleashing of the vast power and knowledge contained within the chakra. It is a powerful concentration meditation.

Chakra Nidra ® is best learned after having practiced Yoga Nidra for some time and having some knowledge about the chakras. We call this practice Chakra Yoga Nidrā. You do not need to have a lot of experience in chakra meditation, simply an initial understanding of what the chakras are and where they are located. Once you have practiced Chakra Yoga Nidrā for some time you can begin the practice of Chakra Nidra®. You will gain a deeper intuitive understanding of what the chakras are all about.

Yoga Nidra is one of the most powerful relaxation meditation techniques available today. Because it is performed in the lying position you can quickly and easily introvert and go within to access the power of your unconscious for deep rest, recuperation, rejuvenation and finally exploration of your inner being.

Yoga Nidrā is a passive technique – you simply have to lie still and follow the instructions without moving or using any effort. Yoga Nidra has two phases:

Phase 1 – The first phase of Yoga Nidra has become extremely popular because it enables people to relax, recharge and rejuvenate quickly and easily. It does not require any prior knowledge of yoga or meditation to give quick results. After one or two sessions you will feel deeply relaxed and refreshed each time you practice. This phase is often so relaxing the many people fall asleep at the start of the practice to awaken at the end of the half hour of practice feeling relaxed and refreshed. And many people think that this is all there is to Yoga Nidrā, however, there is much, much more.

Phase 2 –After some time of practicing Yoga Nidra and hopefully adjusting your lifestyle to one that is more conscious and self-care focused, you will recharge your batteries and, being less exhausted. Then you will not need to sleep during the practice. It is now that you can begin to use Yoga Nidra as a powerful meditation that takes your awareness deep inside of you.

It is in phase 2 that you have choices as to which techniques to employ, depending on what you want to achieve. If you move forward with Yoga Nidrā as a purely passive technique, you can explore the deeper workings of the internal organs of the body; the rhythm of the breath and its ability to calm and heal; the power of the mind and its ability to think, emote and create; and, if you can stay the course, the luminosity of the spirit.

You can also use Yoga Nidrā for active meditations, such as the healing meditation Prāna Nidrā, or Chakra Nidrā.

Prāna Nidrā is part of Prāna Vidyā, knowledge of prāna, life force. It is a series of active techniques. Using a very subtle form of yogic breathing, called ujjāyī prānāyāma, you develop awareness of the life force within the breath. You then move the breath between certain chakras in order to distribute prāna to parts of the body that need healing or rejuvenation.

Chakra Nidra® is a more advanced practice than Prāna Nidrā.

You are advised to start your journey into Chakra Nidrā by practicing Chakra Yoga Nidrā.

Firstly, Yoga Nidrā in general supports you developing your ability to introvert, rest, recuperate and remove the negative effects of stress. Most people are habituated to sleep when they introvert. Yoga Nidrā teaches you how to rest and remain awake. Paradoxically, not sleeping in Yoga Nidrā improves the efficiency of your rest and enables very deep states of relaxation.

Secondly, you become aware of the chakras, the psychic centers located in the spine. Just bringing awareness into chakras starts the process of transformation and awakening.

Chakra Nidra ® is a developed as series of 9 progressively more advanced yoga tantra meditation techniques. The final eighth meditation which incorporates all of the previous stages.

Each stage incorporates the previous stage. Each stage has several steps.

An Auspicious Time for Inner Development

Get authentic yoga and meditation knowledge
and practices;
not just more info
Subscribers receive discounts on
Guided Meditations, Courses and Seminars
A 15% Coupon Code is on its way, when you sign up!